SeeMore Certification for the fitting centers ensures the right training is completed and thereby outlets are able to undertake a custom fitting of the putters.  We always want customers to be fitted correctly for their length, loft and lie and fully understand the method associated with the Rifle Scope Technology (RST) which is on every SeeMore Putter.

Completed in May was:

Congratulations - visiting a pro shop with SeeMore SPI Certification should give you confidence in their ability to understand SeeMore and fit you correctly.  With the putter accounting for approx 40% of the game, having a custom fit putter is a must and with locations around the country its worth the trip to a Certified outlet for your next fitting and purchase.

E-shop order for a custom build of a PTM1 FGP Black received and despatched within 48 hours.  Customer specification of 34.5", 3 degrees loft and 70 degrees lie, and fitted with a Garsen non-Tapered grip and a Red Tartan headcover.

The Precision Tour Milled (PTM1) is essentially the same special “tour” model that is played by the 2007 Masters Champion and 2015 OPEN Champion. Alignment benefits of RifleScope Technology (RST). Straight shaft. Full toe hang. Design and functionality are completely unique to SeeMore, with majority of weight behind center making it very easy to properly release the putter head. Starts with a stainless steel precision cast head made in the USA, and then uses CNC precision milling machines to mill the face, sole, bore hole and RST lines. Full toe hang. Twirl effect for perfect balancing as preferred on tour. Material - 303 stainless steel - black finish.All Putter Models Have SeeMore's Patented RifleScope Technology (RST) Alignment System, For A True Reference Point For Perfect Alignment And Set Up On Every Putt. This putter is face balanced at impact or “balanced to plane”, meaning it's dynamically balanced to the angle you putt and naturally returns to square at impact - less manipulation during the stroke to keep the putter face on the correct path.

The sun is shining on this lovely May bank holiday and Thank you to everyone who entered our latest competition to win a Tour Edge Exotics EXS 220 Driver with ACCRA Golf iWood Shaft. We ran the random number generator to select the winner from all of the entries and we are pleased to announce the winner is John Flood. A slight dilemma as John is a Lefty but not a problem we cannot overcome as the driver is available in a Left-Hand version. We will be in touch with John regarding a fitting and, everyone look out for our next competition in the near future.

Putting Couch - Episode 25 Dr. Bob Winters tells us that every golfer has the capability of dramatically improving their putting, their golf scores, and their enjoyment of the game. Discussion will enlighten golfers of all levels as to why many fearless young players putt "lights out" in their youth, and how any golfer at any point in their golf journey can capture that same level of magic on the greens. “Care less” about the outcome, be less “careful” to avoid undesirable outcomes, and be more “care free” in approaching each and every putt.

Dr. Winters is one of the world’s foremost experts on performance improvement and in this episode he shares insights on how players of all levels can improve their putting through understanding the role that great confidence, great attitude, and great training and preparation play.  It only seems that putting is about 90% mental and 90% physical!  Dr. Bob will have you understanding so much about your own putting game that you will feel that he is talking right to you!

Competition to win the latest Tour Edge Exotics EXS 220 Driver with an ACCRA Golf iWood Shaft closes on Friday - Get your answers through to anne@seemoreputters.co.uk by midnight on 22nd May and we will draw the competition on 23rd May. (Flex, Weight, Etc to be determined). This driver retails at £350, so it is a great prize.

Question - Name the 4 Tour Edge Staff players who play on the Champions Tour?

Waking up to an email from a customer with an endorsement like below makes my day.

SeeMore make the best putters I have ever used ... and I've tried them all in a golfing career spanning 45 years! I've been using a SeeMore putter since Payne Stewart won using one in 1999 (20+ years) and am currently using an old 2007 mFGP SeeMore putter and most definitely won't change to another brand ... ever!! Simple to use, amazing feel, great balance and I've holed so many putts with them!

The tech-loaded EXS driver features a Flight Tuning System (FTS) that includes 9-gram and 3-gram interchangeable weights, an adjustable hosel that allows for plus two or minus two degrees in loft, RollFace Technology for an expanded sweet spot, Dual Carbon Fiber placement for ideal weight distribution and a new and improved SlipStream™ Sole for faster clubhead speed.

Engineers paired the superior TSP 910 Beta Titanium face plate with the exceptionally light Carbon Fiber Crown and with additional Carbon Fiber located on the toe of clubhead, allowing weight to be strategically repositioned lower and deeper in the head for optimal spin and creating an extremely high MOI. The Dual Carbon Fiber Technology also helped Tour Edge engineers to significantly improve the acoustics of the driver and enabled them to account for the gram weight of the FTS weights and the adjustable hosel.

A new RollFace Technology incorporates modified bulge and roll on the toe to create straighter shots for shots hit off the toe, which is where the majority of miss-hits with a driver are made. In conjunction with the sweet-spot enhancing Variable Face Thickness technology, the RollFace makes this the most forgiving driver face ever produced by Tour Edge.

The aerodynamics in the EXS driver are greatly enhanced by a more sloping crown and wider speed channels on the sole. The new, more tapered head profile also reduces aerodynamic drag.

An ultra-premium Tensei CK Blue 2G shaft series by Mitsubishi Chemical is the chosen stock shaft for the EXS driver. Extremely light yet extremely stable throughout, the Tensei Blue CK features advanced materials like Carbon Fiber and Kevlar mixed with other lightweight materials that weigh in the 50-70 gram range depending on flex. 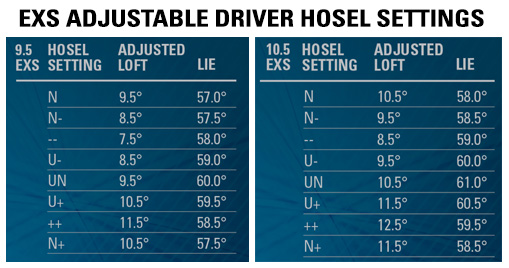 Range of Accessories for Putters
Whether you are buying for a birthday gift or yourself, the SeeMore UK e-Shop has a great selection of accessories available. From groovy headcovers with magnetic closure for blade and small mallet putters or the larger mallet or even the giant range there is a selection available to adorn any putter.

If your set up needs working on then look at our training aids which supports you with this. The CT Mirror which comes with its own backpack bag for safekeeping will ensure your eyes are in the correct position. Or if you have alignment and direction issues the simple Triangulator will enable you to work on this.
We then have caps, shirts, towels and pitch repairer, ball markers all available.
Take a look at the e-shop for the full selection available.
read more

A Tour Edge Exotics EXS220 Driver with Accra iWood Shaft to be won.

We are pleased to be able to offer another great prize with the support of both Tour Edge Golf Exotics and ACCRA Golf Shafts. This week you can win the latest Exotics EXS 220 Driver with an Accra iWood Shaft (Flex, Weight, Etc to be determined). This driver retails at £350, so it is a great prize.

To enter email your answers to anne@seemoreputters.co.uk by midnight on 22nd May and we will draw the competition on 23rd May.

Name the 4 Tour Edge Staff players who play on the Champions Tour?